Five Ferries Ride: in the saddle with Richard Blair

In June, we organised our inaugural Five Ferries Ride, an iconic Scottish day ride which makes a round trip from Wemyss Bays, includes the aforementioned Five Ferries, and takes in the Isle of Arran, Mull of Kintyre and Bute before returning to the mainland.

"It was five years in the making, we decided during one of the ferry trips. The 'we' were a group of friends and fellow riders who had taken on the Five Ferries Challenge with Club Peloton.

“Come to Scotland” I had said to Nick and Chris after the 10th Anniversary Ride, when they were looking for some suggestions of how to break into the regions. "It will be great. There is this ride called the Five Ferries."

It might have been a long time in the making but the day more than lived up to the wait. All week I had been watching the weather forecast and the Friday did not disappoint. We departed Wemyss Bay Station at 7:30 for the first 30k leg to Ardrossan. What a ride we had, covering the distance in a little over an hour and in plenty of time for our first and longest sailing of the day to Brodick on Arran. We had already become aware of the fantastic colour of the sea on the way down from Wemyss Bay and the crossing only accentuated it.

The toughest leg time-wise was the next stage to Loch Ranza and we had one or two unforeseen challenges. The road was being re-laid in Brodick and we got stuck in the middle of a funeral cortege. There is quite a climb some 14km into the ride on what was becoming a hot day for Scotland. It took all of Chris Clarke’s charms to hold the ferry up by five minutes to allow some of us to board. It was another crossing that did not disappoint ,with some dolphin (or possibly porpoise) sightings during the sail to the Mull of Kintyre.

The third stage is a short hop round to Tarbert and the lunch stop. Lunch can be best described as leisurely.  A little too leisurely, it turned out, as we missed the 14:00 sailing for Portavadie. Another hour of leisure and chat, ice creams and a 1,500m unicycle ride by Chris! Was that a ploy?

Now for the Queen Stage: the lumpy cycle from Portavadie to Colintraive. The route was glorious. All the colours of the rhododendron bushes complimenting the sunshine and the sea.  All of this captured at the obligatory photo stop at the viewing point at the top of the Kyles of Bute.

We made it to our fourth ferry of the day. We all had at least four sailings on the day. Most had five, one had four and a couple had seven! This was all because - as it became apparent - in the rush to catch the Colintraive to Bute ferry we became aware one of our number was not with us! The group rode to Rothesay to catch our final ferry. Some of us waited for the lost soul and finally got the news of a wrong turn and more climbing but a fourth ferry that would deliver him back to Inverkip. That now all sounds easier than trying to get a drink in Rothesay: there was a football match on that night!

What a day… and now the challenge of how to better it.  The scenery was stunning, the company superb and all as part of great route. Thanks to the team who looked after us on the day and my own personal thanks to Club Peloton for finally getting north and doing the Five Ferries." 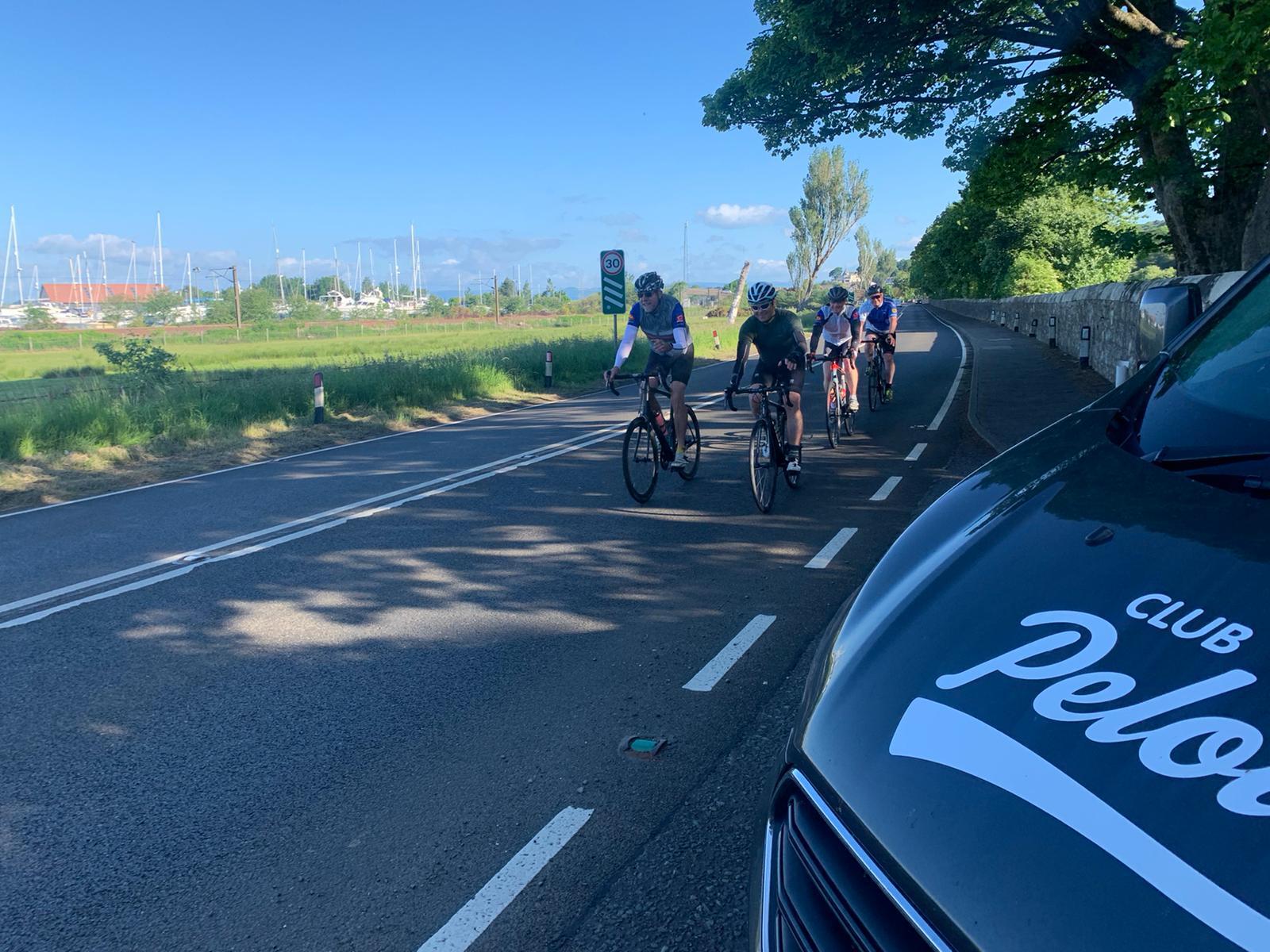 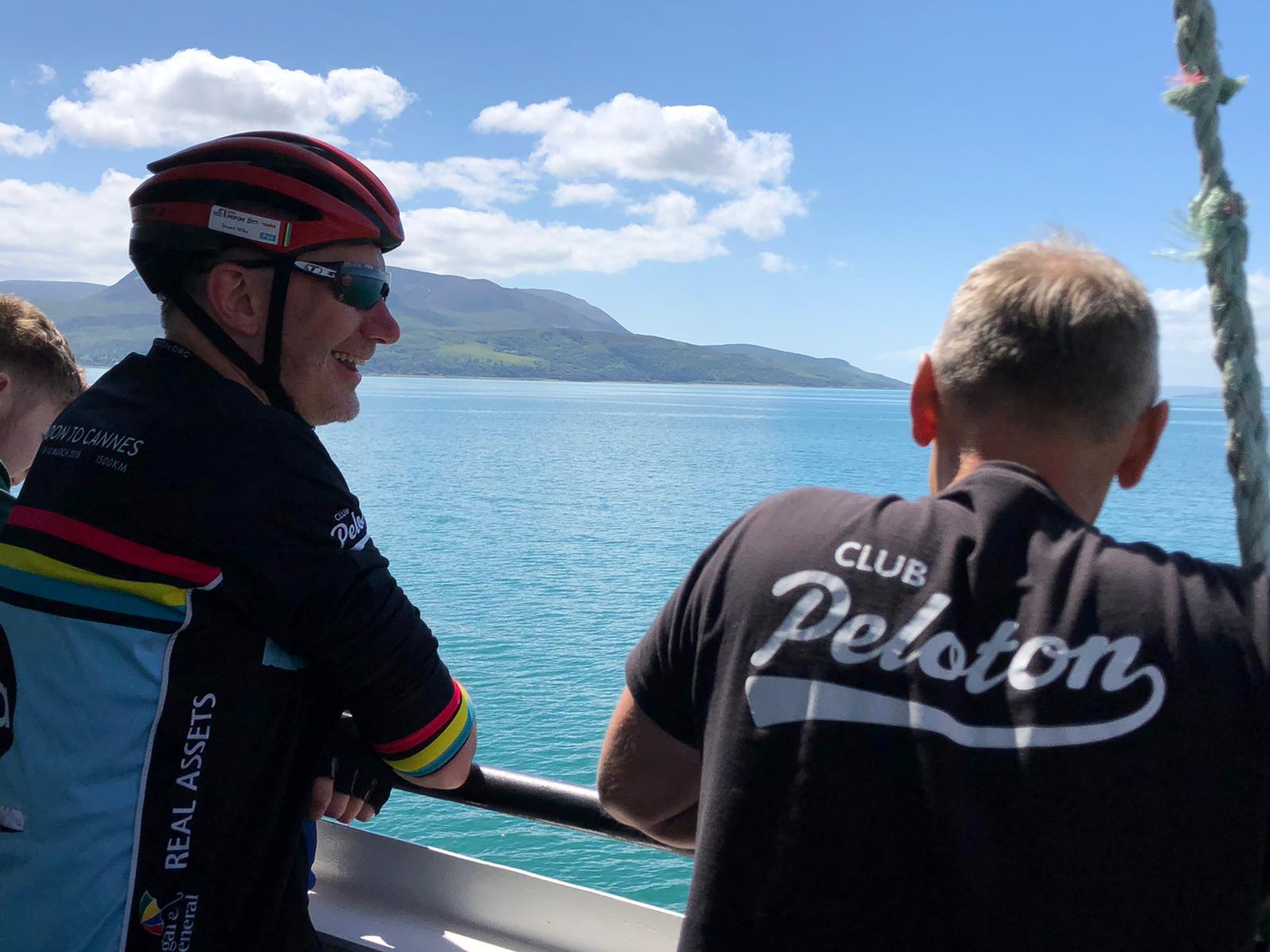 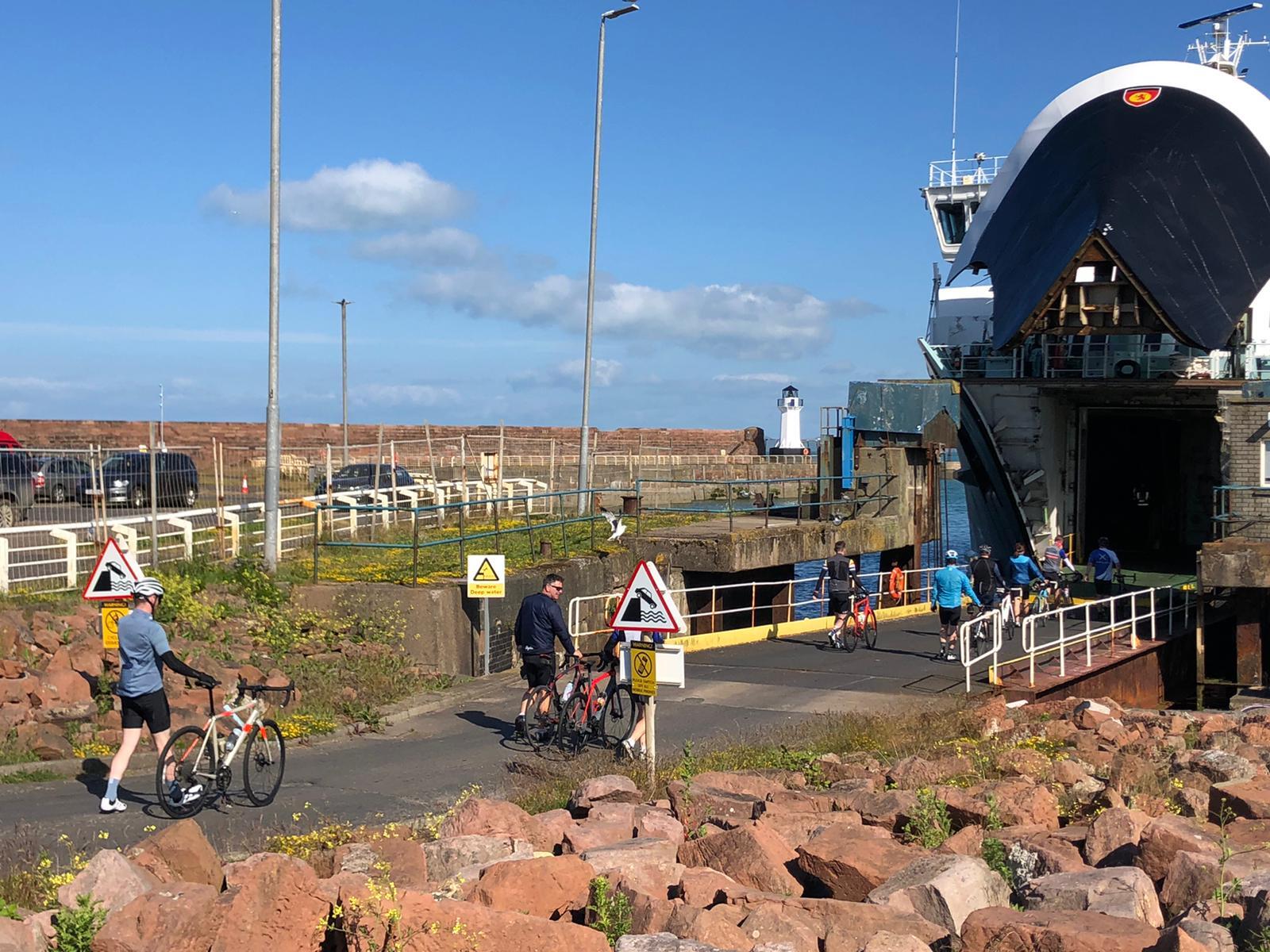 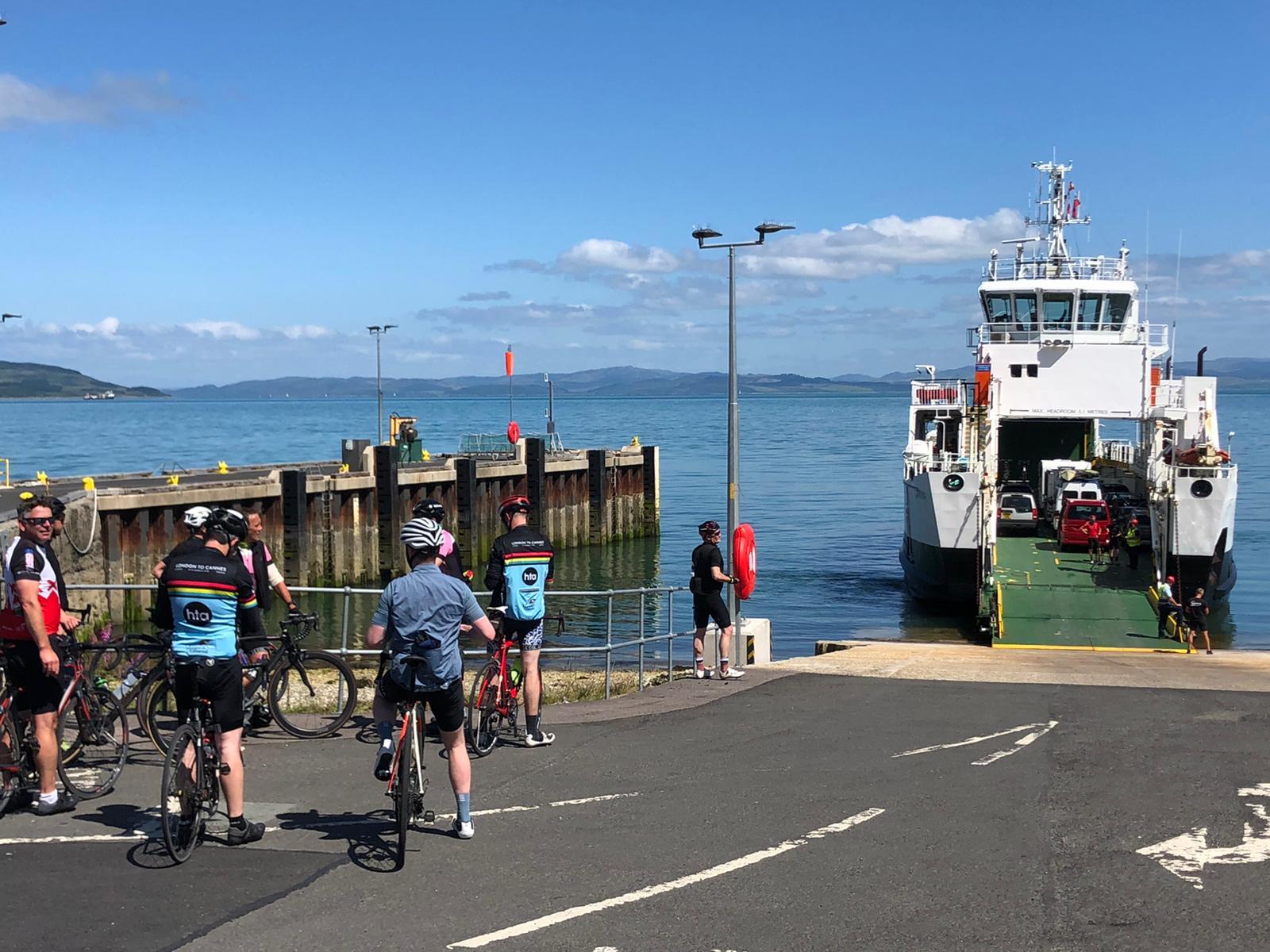 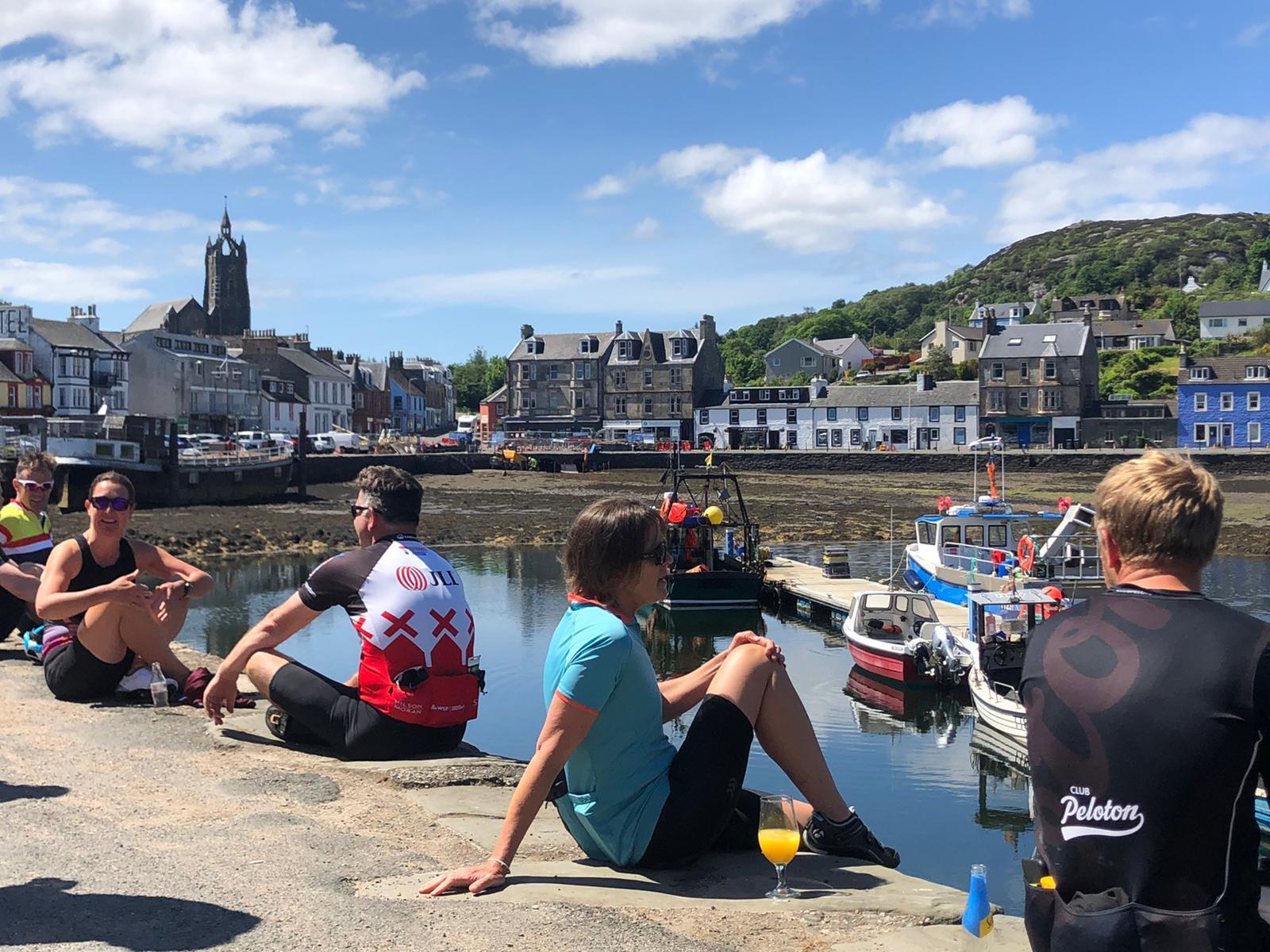