In the peloton with... Nour Jarrouj, The Bike Project

In the peloton with Nour Jarrouj, The Bike Project

Our seventh on-bike chat in our “In the peloton with…” speaker series was an interview with Nour Jarrouj focusing on ‘Overcoming cultural stereotypes in cycling’. Toby Fox and David Taylor from Velocity Magazine talked to Nour about The Bike Project, how its work has been affected by COVID-19, her life and experiences in Syria, and how she is helping women overcome cultural stereotypes to learn to ride here in the UK. 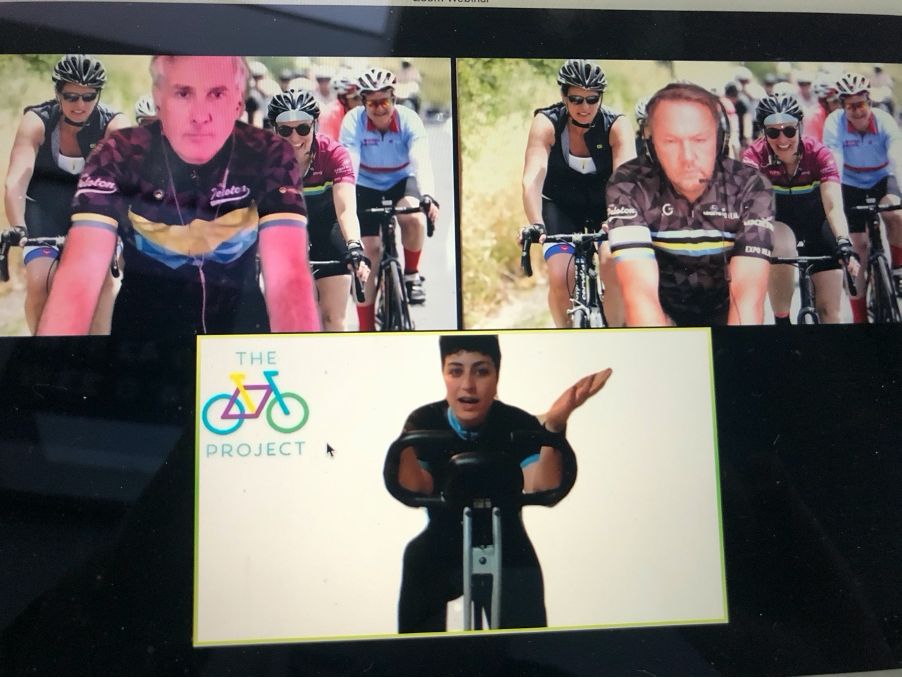 Nour, who grew up in Syria was one of the first woman to join the Yalla Let’s Bike initiative in Damascus, which taught women to cycle as a quick, cheap way to get around. It broke the gender stereotypes and social barriers of women riding bikes, and in one year, the number of women cycling in Damascus went from four to 1,200.

In 2018, Nour moved to the UK when she was awarded a Civil Leaders’ scholarship to study a masters in violence, conflict and development – it was during this time that she became involved with The Bike Project. The Bike Project takes second-hand bikes, fixes them up and then donates them to refugees and asylum seekers, enabling them to access food banks, healthcare, education and to travel to and from interviews and places of work. Since 2013, The Bike Project has given away over 6,000 bikes to refugees from dozens of countries including Syria, Eritrea and Albania. 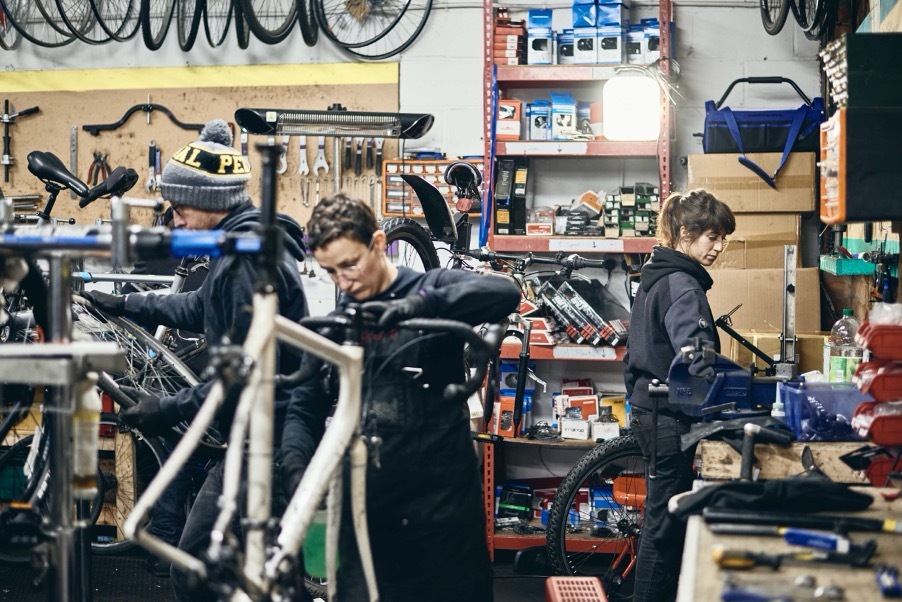 Nour manages The Bike Project’s Pedal Power programme, which offers free group cycling lessons for refugee women in London and Birmingham. So far this programme has taught over 380 women to cycle and also provides free bikes, helmets and equipment. Nour also champions the ‘Bike Buddies’ initiative that matches refugee cyclists with a buddy in their local area and aims to build cycling experience and encourage social integration and greater independence. 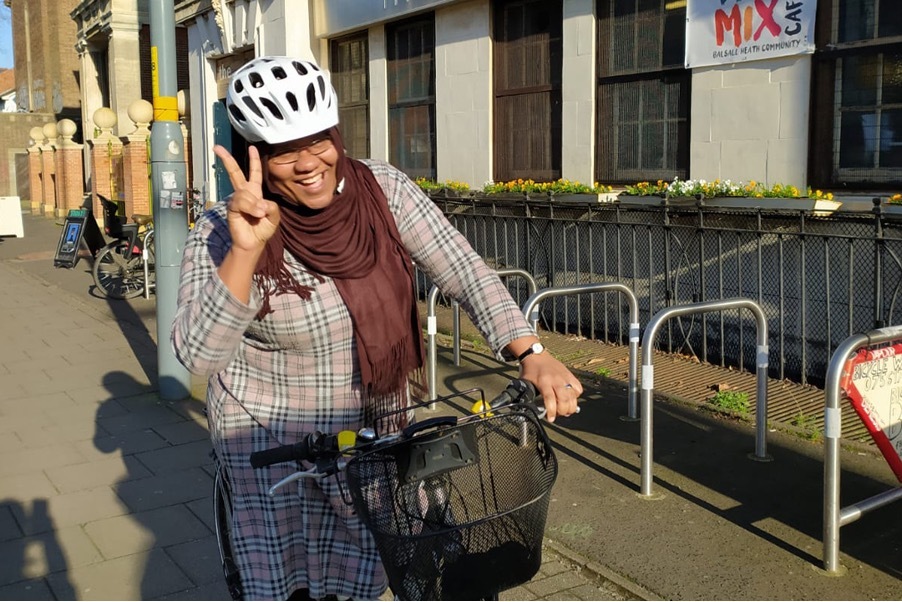 Named as one of 10 women making a difference in London by the Evening Standard on International Women’s Day in March 2020, Nour continues to promote and highlight the power of cycling and the difference a bike can make to the lives of those who often arrive in the UK with nothing. We wish her all the best and are so pleased we had the opportunity to talk to her. Find out how you can help The Bike Project below. 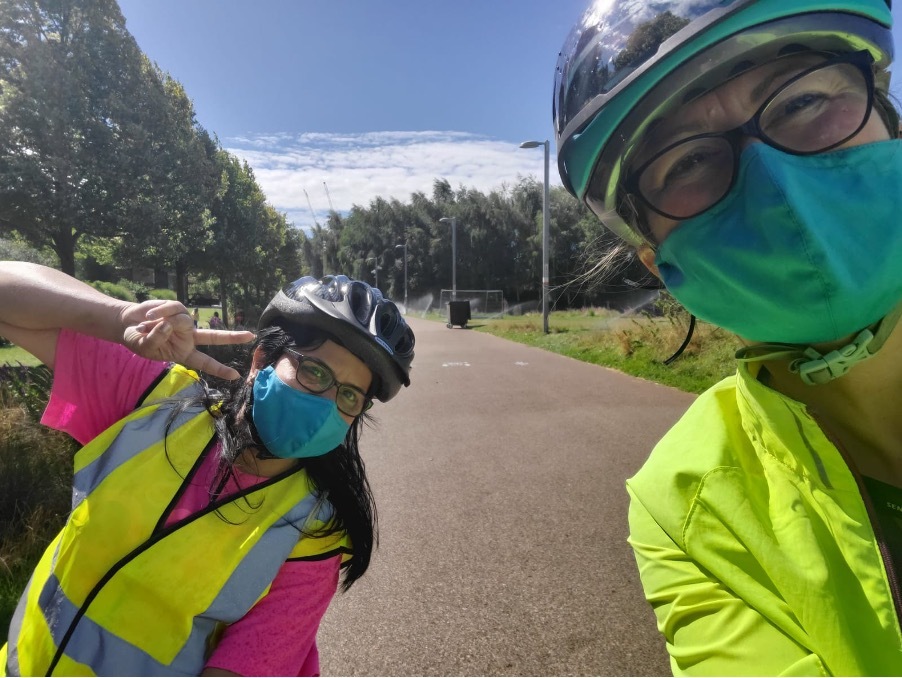 Here’s how you can help The Bike Project:

If you fancy a challenge, join our cycling fundraising challenge. You can pick from four common routes that refugees take to safety, or you can pick your own route. We’ve had some really ingenious ways to meet this ‘design your own challenge’, such as cycling between all ten football stadiums in London. You can find out more and sign up here.

If you’re missing live comedy, you can join our comedy night on 3rd November 2020! We’ve got a cracking line up, headlined by Frankie Boyle, who will be joined by six other comedians doing short but epic sets. Jen Brister will be MC-ing the night. The show will be streamed live to your home, with tickets starting from £10. Grab yours here.

As always, our mission can only continue with donated bikes! You can find your nearest donation point at the following link. Every bike you donate goes directly to supporting refugees, whether it’s being donated or whether the proceeds from the sale goes to supporting refugees. Help us get more donations here.