Last month we featured the Tom ap Rhys Pryce Memorial Trust which Club Peloton has supported since 2008. Over the past 12 years, Club Peloton riders have raised over £360,000 for the charity, which has made an enormous difference to the various projects that do vital work in their field. This month, we’re highlighting another project that has been supported and funded by Tom's Trust with the help of Club Peloton donations since September 2018: Switchback.

Switchback is a small independent charity that uses training in catering as a vehicle for mentoring young ex-offenders and integrating them into society. In November, Switchback was delighted to win the Longford Prize.  This annual award, celebrating achievements in the field of prison reform, recognises qualities of humanity, courage, persistence and originality.  The judges said:

“The transition from prison back into the community is so often when the system fails. For the past 11 years, Switchback has been engaging with 18-30-year-olds in the London area, many from BAME communities, to support them through the gate. It does this so effectively that the individuals it helps each year are five times less likely to reoffend than other newly-released prisoners. It enables lasting change through intensive one-to-one support, real-work training and a range of strategic partnerships. It is, the judges believe, a focused, inspiring resettlement charity that is a beacon of hope at a time when centrally-funded alternatives are in chaos.”

All trainees are recruited to the Switchback programme while serving custodial sentences. The programme's aim is to reduce reoffending by supporting trainees for as long as it takes to help them take control, make a more stable life for themselves and settle into a catering job or work or education in any field.

Nationally, 49% of offenders reoffend within a year but for Switchback trainees, this figure is currently just 8%. Since Switchback opened their doors in 2008, 2,073 young men in prison received pre-release support for up to three months and 312 young men became trainees, receiving intensive one-to-one support alongside real-work training on the outside.

Some highlights of the last year include:

In 2018, Switchback began to deliver training to probation and prison staff in aspects of its model, with the firm belief that this can improve the quality of supportive relationships on offer in prisons for prisoners. Switchback knows what it takes to build good boundaried, motivational relationships which is why the training was co-designed and delivered by the EBE members.

Two-thirds of the prison officers said they learned a completely new way of working from Switchback and 90% said they thought it would really help them in their approach. Switchback is thrilled to be in a position to help prison and probation officers to work more effectively with prisoners and are rolling this out with other services.

“My Switchback mentor taught me to plan ahead and so much more: posture, eye contact, and other stuff you need for interviews. All that was new to me. Most people in prison have skills but they don’t know they have them until someone shows them. As much as they might want to sort their life out, it takes a huge thing to break out. Switchback showed me the layout of the world, and how work works. The future’s looking bright.” 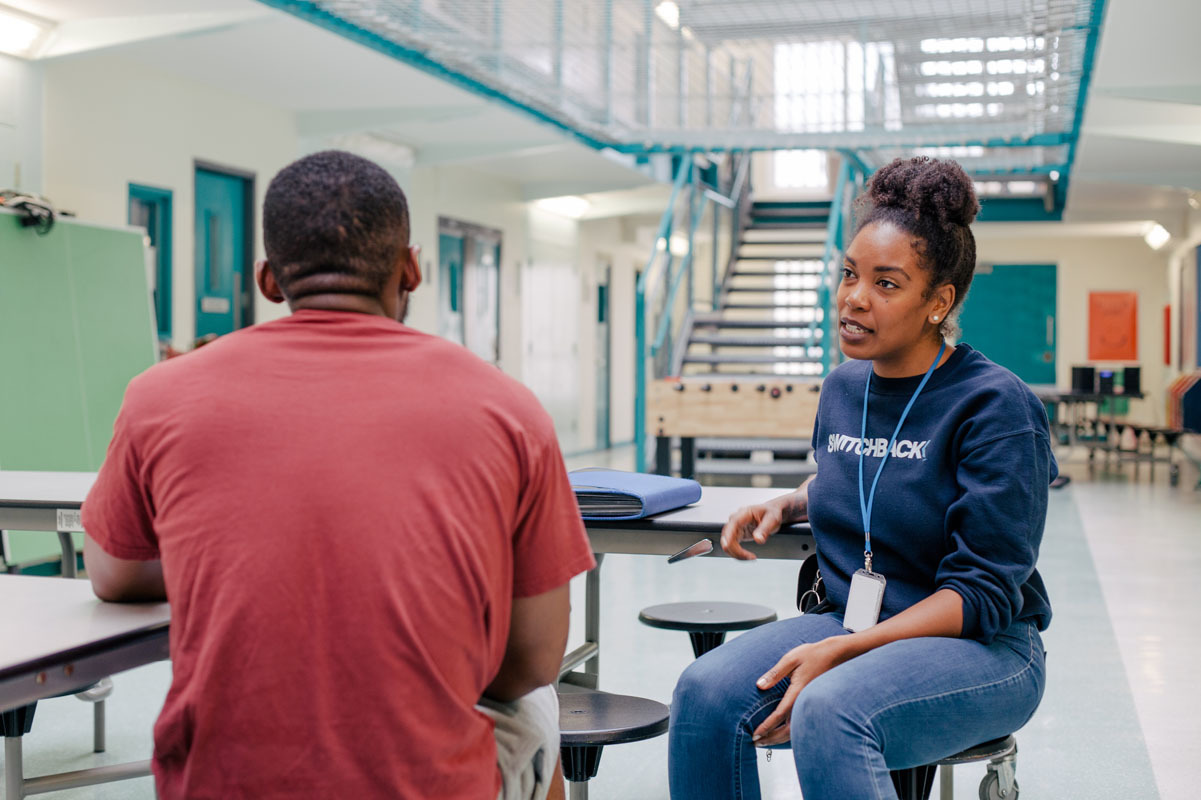