The Tom ap Rhys Pryce Memorial Trust ("Tom's Trust") exists to help tackle the root causes of violent street crime in London by helping disadvantaged young people see the potential value of their own lives and therefore the lives of others too.

Set up in memory of Tom ap Rhys Pryce by his family, friends, fiancée and former employers at Linklaters LLP following his senseless death in a random street attack, Tom's Trust is 100% volunteer run, with no overheads, so every single penny raised is passed directly to the most effective youth organisations and projects across London. 2020 is the 15th year that Tom's Trust has been tackling the root causes of violent street crime and gang culture. The Trust wish they could say that the streets of London were safer now than in 2006, but sadly the 2019 knife crime statistics were the worst since 2011.

London Boroughs have had their Youth Services budgets cut by up to 70% since the austerity programme began in 2010, and the boroughs with the biggest reductions in spending have seen the biggest rises in crime. The need for youth clubs and opportunities for young people to develop their skills and aspirations has never been more vital.

With the continued support of Club Peloton the Trust can invest the fundraising donations to empower more amazing front-line organisations to unlock potential in young people, and ultimately save lives.

Tom's Trust has been supported by Club Peloton since 2008 and over the past 12 years have raised though fundraising efforts over £360,000 for the charity which has made an enormous difference to the various projects that do vital work in their field.

Over the next few weeks we will be highlighting three specific projects that were supported and funded by Club Peloton donations since September 2018:

The Lighthouse London Community Trust is a Charitable Incorporated Organisation set up by The Lighthouse. The Trust launched the Spear Course in the Autumn of 2013 to serve unemployed young people in the community.

Spear is a twelve-month programme beginning with an intensive six-week foundation phase aimed at getting young people ready for work. After the initial six-week course, the Spear coaches work with the young people for twelve months to help them find, sustain and progress in work or further training.

The object of the award-winning course is to equip and support disadvantaged 16 to 24 year-olds who are not in education, employment or training to find long term employment.

There are 5-6 courses a year, each for 12-15 students.  Spear students struggle with a range of social, behavioural, domestic or mental health challenges, and have experienced difficulties with mainstream education.  The students are recruited by Spear directly from Job Centres, or are referred by local institutions, or self-refer.  Spear does not accept everyone who applies: the coaches ensure that the students are young people who have needs that indicate they would benefit from the course. 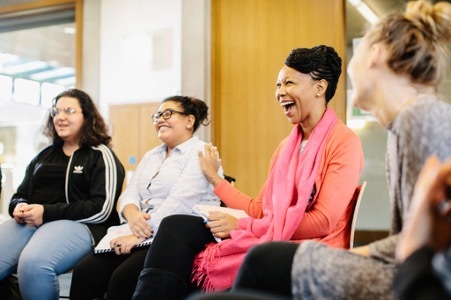 “No one can do everything, but everyone can do something. Helping disadvantaged young people realise everyone’s life has value and purpose is why we are so proud to support the work of Tom’s Trust.”

“To be able to give back to those young people who are most in need is very satisfying, especially when we see their lives turned around and their aspirations realised. The money that Club Peloton has given to Tom’s Trust from their unique fund-raising rides, has made an enormous difference to our ability to support a number of vital projects, each of which is really effective in meeting the needs of the young people they work with.  We at Tom’s Trust are immensely grateful to Club Peloton and to all who so generously donate to the charity."