To Haslemere and (almost) back…

Getting up at 5.30am to ride in the dark and the cold for 150km can only mean one thing: MIPIM training season is here again. So, around 20 of us found ourselves in a cafe in Putney, downing porridge and lattes before heading out onto the early rush hour streets. Forecasts of downpours and strong headwinds weren’t enough to put off the bunch as we set out for Surrey.

After doing these rides for a little while now, I’m beginning to get used to the familiar faces. Team captains Terry Crawford, Alan Dunsmore, my old friend Andrew Davies, and the ubiquitous Toby Fox. But this ride also has a few new faces, including Sinead Connelly of up and coming structural engineers, ‘Simple Works’.

No matter how I try to dress up my ‘woke’ credentials, I always hope that when there are women on a ride, the pace might be a little easier on my spindle-like legs. But despite her protestations, it turns out Sinead is an Iron (wo)Man and spends more time on two wheels than most endurance athletes. Any hope of a reprieve was out of the question as we picked up a steady 15mph+ pace through the sunrise. The team pushed on through Richmond Park, leaving the suburbs behind and heading on towards Surrey.

We take Box and Leith Hills from the wrong side, going down the switch-backs on Box and up the normal descent on Leith. Then we head into rolling villages and fields of quaint English villages. A quick break in Wisborough Green and we turn west towards Haslemere and back toward London.

Fast forward a few days, Sinead and I are enjoying the most incredible vegan porridge in her local coffee shop. I’m no vegan, but this porridge is making me question my life choices. If you’re ever in Cambridge Heath or Old St, you must try the vegan porridge at Ozone Coffee…

As a start-up, I’m fascinated by the Simple Works story. We started our own business a few years ago, it’s been challenging as well as an exciting journey. It’s great to hear others’ perspectives on that journey.

Sinead explains the main impetus to setting up Simple Works was to regain control of the type of work they were doing. Their aim being to target community and sustainability focussed projects.

Part of this may have been sparked by their creation of ‘Scale Rule’. They're a charitable collective aiming to bring engineering into schools that might not otherwise experience or engage with design and engineering in a hands-on way. Each year they take a winning school’s design project and turn it into reality at Clerkenwell Design Week. Their success, using engineering to bring about positive societal change sparked a belief in the team that they could go it alone.

Their first year or so in business hasn’t been without its challenges. The team have found one of their biggest hurdles is getting people to take you seriously. Something Limeslade also struggled with. As a start-up, it seems to take at least twelve to eighteen months before people actually believe you’re sticking around.

Another obstacle Simple Works face is keeping to their ethos. Their fundamental philosophy is to keep things simple and extend the principles of community engagement from the ’Scale Rule’ project. The team also have a strong desire to build sustainability and alternative materials into everything they do. However, persuading others in a project team to participate in that goal can be a little challenging. And breaking away from smaller projects, to larger ones that the team have the skills and ability to deliver has also proved taxing.

At Limeslade we’ve been heartened by folk’s willingness to help us out. Some more than others, but the number of people who’ve helped us in our first few years has been amazing. This resonates with Sinead. We both agree you should never be afraid or too proud to ask for help when starting up a new business. And you’ll often be pleasantly surprised by the response.

Other challenges are only too familiar. Navigating the minefields of VAT, incorporation, accountants, administration... Why is this stuff so boring? How do you ever strike a balance between doing the work and winning the work? When will you ever get normal sleep patterns back? Starting a business so often feels like the best and the stupidest thing you’ve ever done, all at the same time.

But despite being new kids on the block, they’ve already picked up some interesting projects. Working with architects ‘IF_DO’ on the Lightwell Pavilion was a highlight of the first year of trading. A large span timber truss roof in a confined space within a Grade II listed building gave the team something challenging they could get excited about.

So, where next for Simple Works? They’ve won their first ‘big’ commission, by which Sinead is visibly excited. They hope to build on the success they’ve enjoyed so far and develop the team to support new and exciting projects. As a small and young firm, they have the ability to be dynamic and react to change in a way that other firms might not. This is something you can use to your advantage - and Sinead and the team are clearly no strangers at playing to their strengths, both on and off two wheels.

Back out on the road, Sinead and the super-strong riders disappeared into the sunset. Quite literally, as it turns out they only finished their ride around 6pm. To my chagrin, I didn’t make it all the way. I and two other riders divert to Haslemere station. The others had genuine excuses, I used pressures of work for mine! The rest of the group sent photos from a victorious pub arrival after 150 km of winter madness. A good effort, as they say in the frozen north. 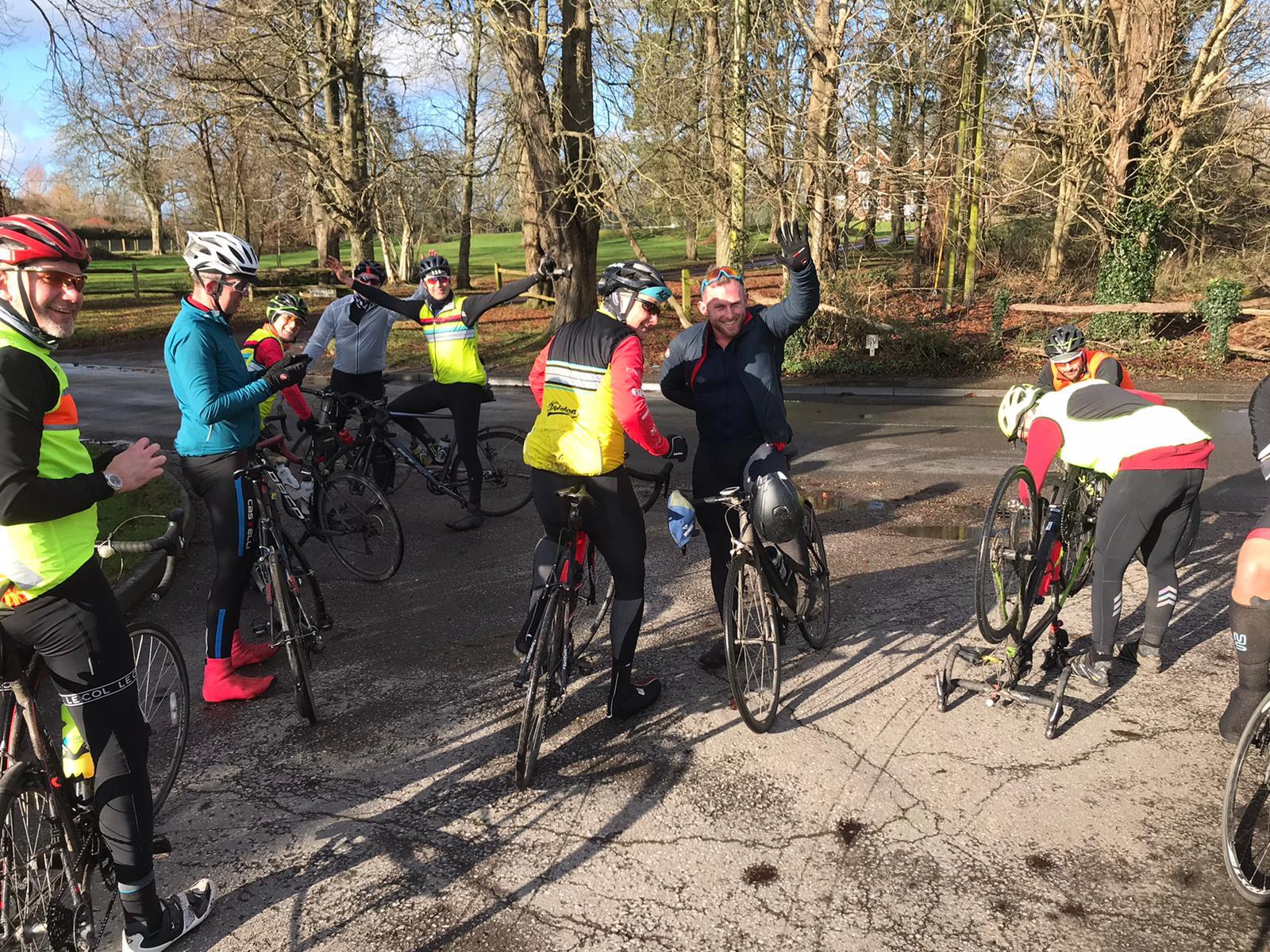