Riding to MIPIM, cycling overnight to Birmingham, training in the rain - a few of the crazy ideas Club Peloton come up with for us. Beyond that, it's great to get together for a social ride every now and then.

However, some of us are noticeably more competitive than others. And so it is with the head man at South London contractors, Forcia. Terry Crawford, not content with organising a charity cycling day, insists an element of competition is added. And there’s no tolerance for those who (like me) fancy a stop at the pub along the way.

The ride is a timed team jaunt around the Sussex countryside. For reasons best known to Terry, it starts with a ride up, and then immediately down Ditchling Beacon. Nice. If you like that kind of thing.

So with some trepidation, I accompanied one of Terry’s friends, Gareth Atkinson of Civic Engineers on the Forcia Life Cycle. Gareth, almost as competitive as Terry, was keen not to finish outside the top ten. I’m pleased (or relieved) to say we didn’t let him down…

Fast forward a few weeks and we’re catching up with Gareth at Civic Engineers’ riverside abode. It's an old grain store at the edge of the mud-caked south bank of the Thames. It would be unfair to say Gareth is precious about his bike. Yet when he proudly shows me the firm's bike store, he adds that his bike stays in reception, “in case it gets scratched”…

Attention to detail seems to be Civic Engineers' thing. Even the floor of the bike store is corporate green. The conversion of the grain store to a working studio is fantastic. We sit in a room surrounded by drawings. Sketches of streetscapes, public realm, and buildings before and after columns and structures are taken out are all around us. Gareth explains a key to their ethos is the ability to communicate, particularly through visualisation.

Indeed, I recall the first time I met a structural engineer. A tweed jacket and carefully stitched leather arm patches were essential, communication was definitely not. This is not the case with Gareth and the team. But when it comes to what makes Gareth tick, we keep returning to places. We come back to traffic, the role of pedestrians and the bicycle in the urban realm.

The firm are working on regeneration of a town close to my heart at the other end of the Thames estuary in Essex. Like so many towns in the 1960s, someone decided a good idea might be a dual carriageway through the town centre. Now, 60 years later, views are changing.

Being ‘passionate’ is something everyone likes to pop on their CV. but there’s no doubt Gareth is passionate about making the urban environment better. In Southend, their plan is to open up an area currently divided by motorway. The goal is to re-align the ‘equality of hierarchy’. According to Gareth, we used to think the car should be king. But in reality, the car should be a guest to residential or urban areas. Having the car dominate urban streets is something we need to address.

For the team at Civic Engineers, sustainability goes well beyond the obvious. The conversation moves to water - something which wouldn’t even occur to ‘normal’ people. If you build a road, you of course need to manage the water. Gareth and the team have worked on innovations to ensure that contaminates from the street don’t get washed into drains. They aim to deal with dirty water through the use of green infrastructure and SuDs before it enters the water course.

Innovations like these are the type of thing Gareth sees as being vital to the future of their business and to construction and real estate.

So back to the ride. The red mist came down a little towards the end of the event. The thought of keeping in the top ten and ensuring we’re at the front of the queue for the barbecue was ever-present. Luckily for me, and happily for Gareth, we finished just inside the top ten. However, we were disappointingly beaten by the team from law firm Fenwick Elliott – always disappointing to be beaten by a lawyer… The event is fantastic. Beyond their construction work, the team at Forcia have command of glorious weather, fantastic rides and brilliant barbecues! 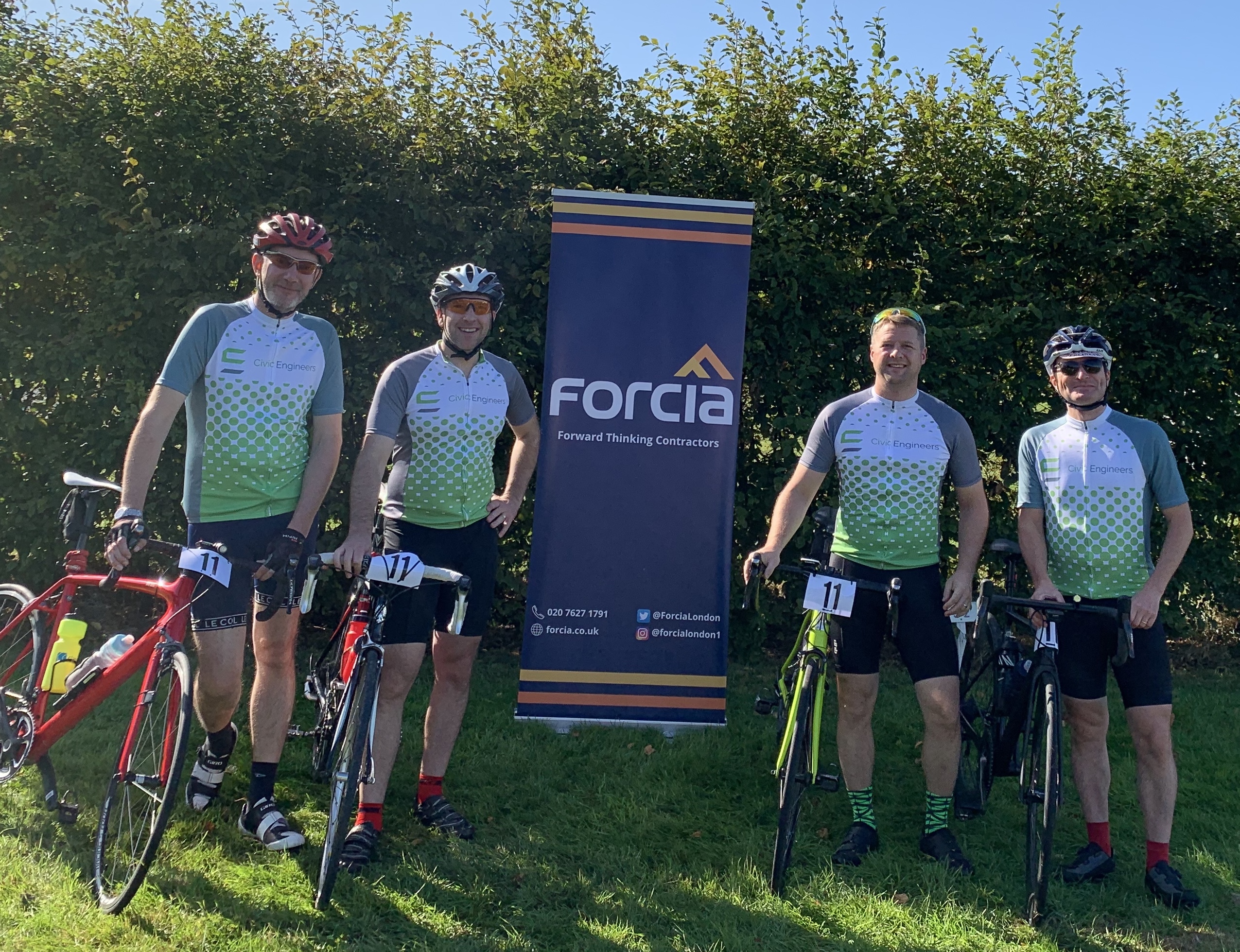 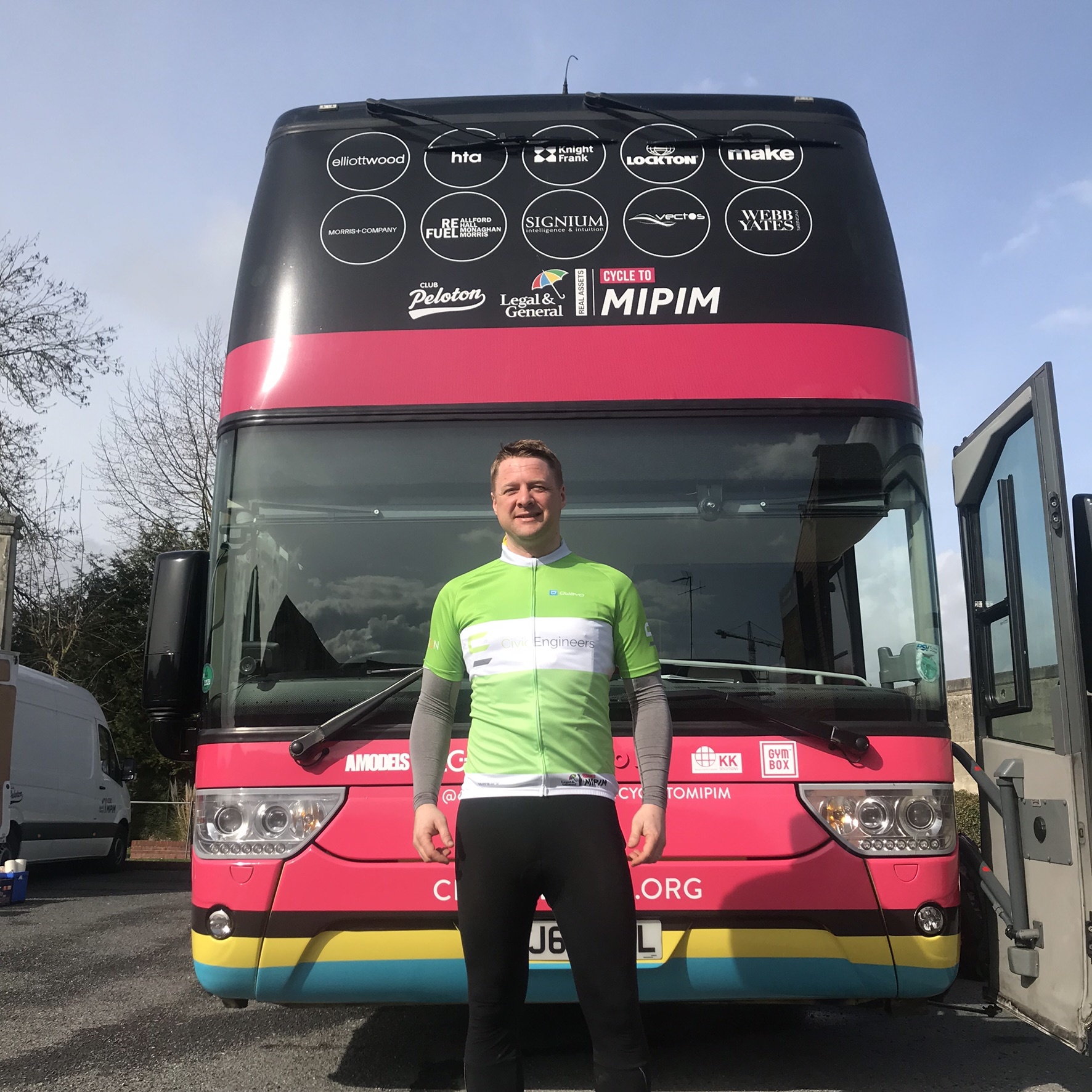