This year, Wembley Park Cycle to MAPIC team sponsor British Land is putting forward a team of nine: five women and four men. This is the most women from one company to take part in a Cycle to MAPIC to date. In addition, this equals the total amount of women who took part in Cycle to MAPIC last year - so in terms of diversity, it’s great progress for this event.

The strong female team is in big part due to the role played by Roger Madelin, a long term rider and supporter of Club Peloton events, and Jess Ford, who rode Cycle to MAPIC for the first time last year. Roger was determined that the 2019 edition would see more women on the ride and he and Jess have been on a recruitment drive since Cycle to MAPIC 2019 launched back in June: Roger talked to everyone in the company who could ride a bike, and sent them to Jess who told them what an amazing experience it was and encouraged them to sign up.

Of the nine riders, six are new to Cycle to MAPIC. Three of the team - Roger, Symon and Dave - are experienced riders and have been helping the new recruits with everything from training to spontaneous bike spot checks and mechanical support/guidance! The five women - George, Ellie, Rhiannon, Jess and Nicola - have done a lot of training together and with the wider team. Roger often organises weekend rides and trips out of London, like cycling around the Isle of Wight, with everything planned from departure time to bike transportation.

Training together in all weathers has enabled them to work out what kit they need, what to buy, and what to eat and when. And it has also helped them to get to know each other: while some of them currently work together on the Canada Water development, others work in different teams and on different projects. They say riding together breaks the ice and helps you get to know people in different ways.

They are apprehensive about the route, because it’s new this year and “lumpy” to the tune of around 2,800m of climbing every day. The hills, eating enough, and pacing themselves are their biggest challenges. Between them, they are looking forward to the descents and scenery (Jess); the ‘stash’ or new kit (Rhiannon); spending time with the team doing something really hard - and the finish (George); the scenery, food and in-jokes (Ellie); and the camaraderie, sense of achievement of all of us together and eating a lot (Nicola).

Together they’re keen to support Coram and the work it does and with British Land match funding, they’re hoping to raise a significant amount. Rhiannon’s mother was adopted, so there’s also a personal connection to the adoption services that Coram provides.

We look forward to seeing them out on the road and wish them all the best! 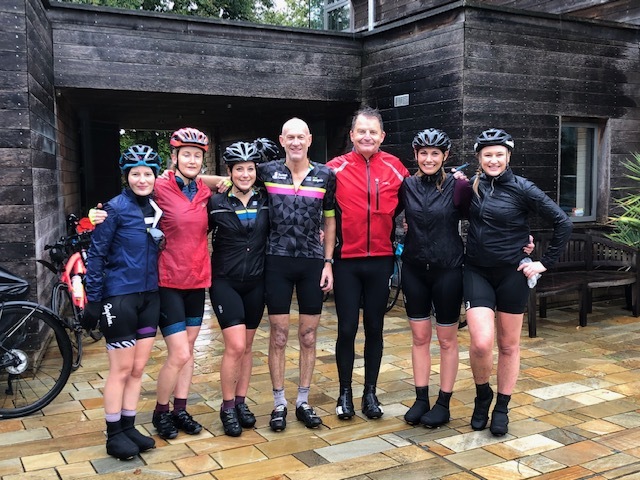