Folkestone route
Day Five dawns early once again for the Folkestone riders. Both groups have now covered more than 1,000km with 421km still to go over the next two days, along with 4,790m of ascent. It’s still dark when team Lockton roll out of Stage 1, along with team Make and any other riders opting in to do this early morning stage. As dawn breaks, the noticeable change in the scenery and architecture is clear to see, with pines and cypress trees, warm stone and terracotta tiles giving a much more Mediterranean flavour. It’s relatively flat then there are two nice wooded climbs, each accompanied by a lovely sweeping descents. Although it’s a very chilly start to the day, at last the sun is out and Stage 2, led by Elliott Wood with Vectos, brings another beautiful ascent followed by gorgeous medieval towns like Grignan, bustling with Monday markets.

Stage 3, led by HTA with Webb Yates, is much flatter but continues with the theme of lavender fields, vineyards, olive groves and pretty towns. The group makes up time thanks to a fantastic tailwind but is still battered by crosswinds and a longer 57k stage, so lunch at Isle sur Sorgue (served in a gymnasium that more closely resembles an aircraft hangar) is a welcome respite and a chance to soak up some Vitamin D. Make then lead out stage 4, the climb to Bonnieux, which sees almost the entire peloton out on the road, because this is one of THE stages of Cycle to MIPIM: an enjoyable ride amongst the vineyards, a beautiful climb to the medieval hilltop town of Bonnieux, and then the long and sweeping descent through the gorge. Everyone does the entire climb as one group, illustrating how well this peloton are now riding together. At the end of the stage, it’s fair to say there are a lot of happy riders who once again blown around at the next stop before heading out for the final stage of the day, and the first one in France to be finished in the light, before arriving safely into Aix.

Portsmouth route
On the penultimate day, the Portsmouth route enjoyed an extra hour in bed and rolled out of Valence at 7am (in the light, no less!), led by team Lockton. The morning is crisp but sunny as the peloton makes its way to Cleon D’Andran, through the most stunning scenery of the ride yet.

There was steady climbing through the first two stages, riding through the medieval commune of Visan, past clusters of olive groves and cherry trees. We were all mesmerised by the views of distant Mont Ventoux in the hazy sunlight. The peloton are still going strong – it’s clear that the dedication to training over the last four months has paid off.

Riders enjoyed a long descent into lunch, with the catering crew whipping up a thai coconut  bowl (sponsored by Morris+Company) and more carb-heavy goods in the sunshine, before we set off into the last two stages of the day, led by Make Architects. The peloton climbs ascents of up to 709m in a stage of picturesque switchback roads, tight turns and acres of vineyards, before looping around quiet hilltop towns, before a quick coffee stop gave us a final burst of energy on a shorter, flatter, 37km to the hotel.

Italian route: La Spezia to Finale Ligure
Breakfast. What can you normally say about breakfast? Normally not that much other than it was good. Not in La Spezia! There was the aroma of freshly baked pastries wafting up the stairwell as the closer one got to the breakfast room. Then there was the monster Nutella dispenser, and the next discovery was the display of five different local honeys to choose from, and that was just the tip of the highlights iceberg! What a start to Day Five.

Everyone set off for the stage which provided a good amount of climbing first thing, and took the riders from a bustling port town up into the hills and a relatively remote ‘splash and dash’ stop at 35km, before the final push to the top of the the Passo del Bracco before descending back to the coast at Sestre Levante for a well-earned break, with the sparkling Mediterranean as the backdrop.

The stage was slightly interrupted by our first ‘off the bike’ incident – or should I say ‘Bike – off’ – which saw a couple of riders slip on a corner. Some minor scratches and bruises were quickly attended to by the ride paramedic, and the group continued on a little more cautiously to coffee.

The group was now tracking along the Ligurian Coast, and heading directly into Genoa, one of the busiest ports in Italy. A short comfort break just before the busiest section of the ride meant that the entire group were in the right frame to deal with the complete contrast to the morning’s stage. Busy roads – even over the lunching hour – were well and truly covered by all riders who dealt with the “North Circular” type ride with ease. They were back on the coast road and making their way through coastal towns, around and over headlands, and descending back into the next round of the same with ease.

On the run into Lunch in Arenzano, there was a slightly more serious off when Danielle suffered a front wheel hub failure and went over the handlebars. Danielle was well attended to on the scene and taken to hospital for observation. Thankfully it was relatively slow moving, but nevertheless, it shook the peloton, and has left everyone feeling like there’s a part of the ride missing for the last stage.

After lunch, a little later than planned, the ride made use of a recycled railway line (more on that in Day Six’s report) to make their way through a tunnel for the first kms of the last stage of the day. The light started to fade but the energy levels were high as the peloton swept through coastal towns on the final run into tiny Finale Ligure for the evening. Supper provided the entree for the awards ceremony ably led by Matt Thornley – one of the instigators of the Bari to Cannes ride – which saw all riders presented with at least one prize, some two, but all deservedly awarded for their contributions to the ride and peloton as a whole.

Tomorrow will see the group depart at “30 after the dreaded hour” again, but if that means they can roll into Cannes with the two other routes, it’s a sacrifice they are all happy to make!

See you all in Cannes for a well-deserved celebration of a stunning set of rides for Cycle to MIPIM 2019. 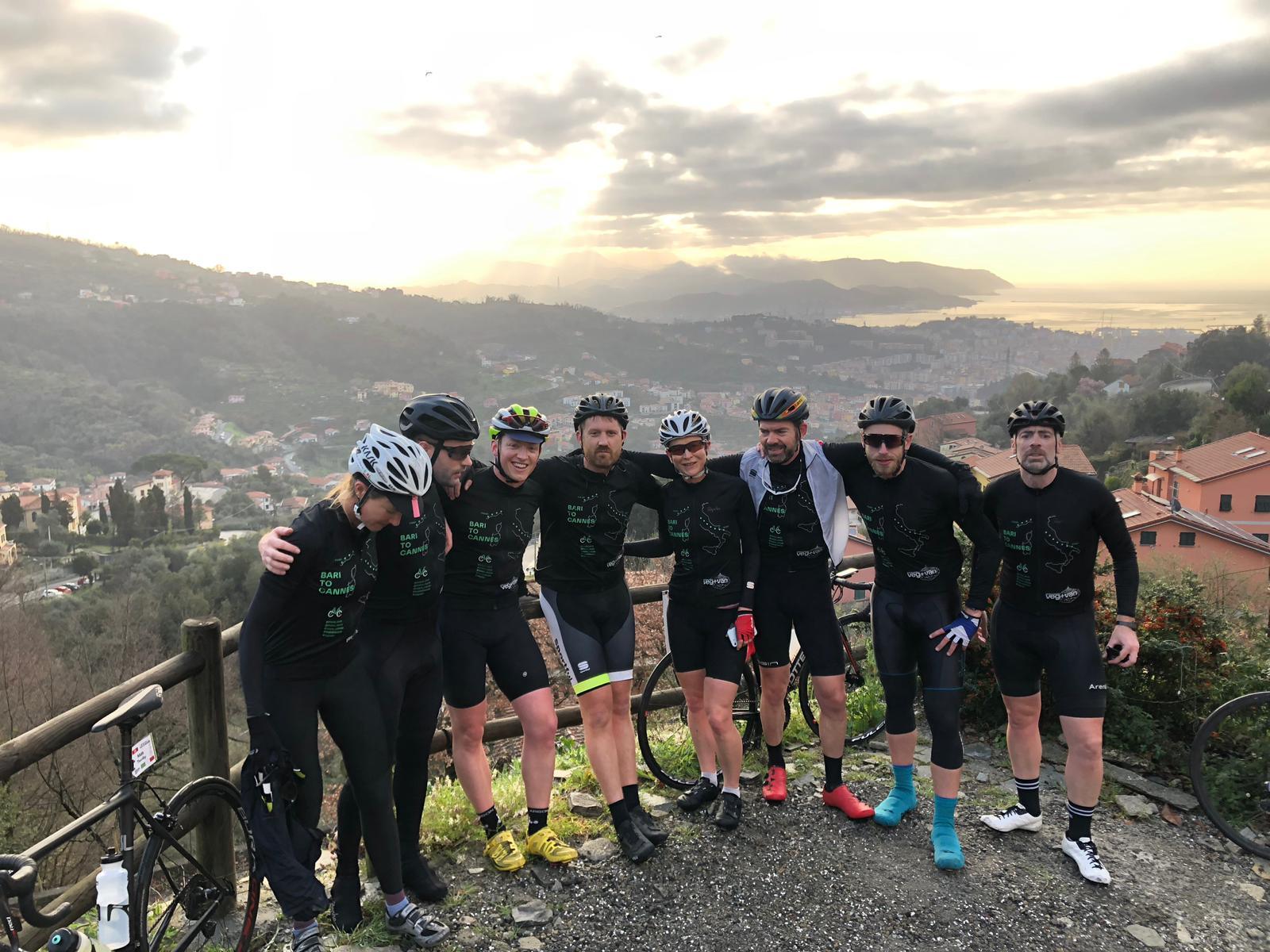 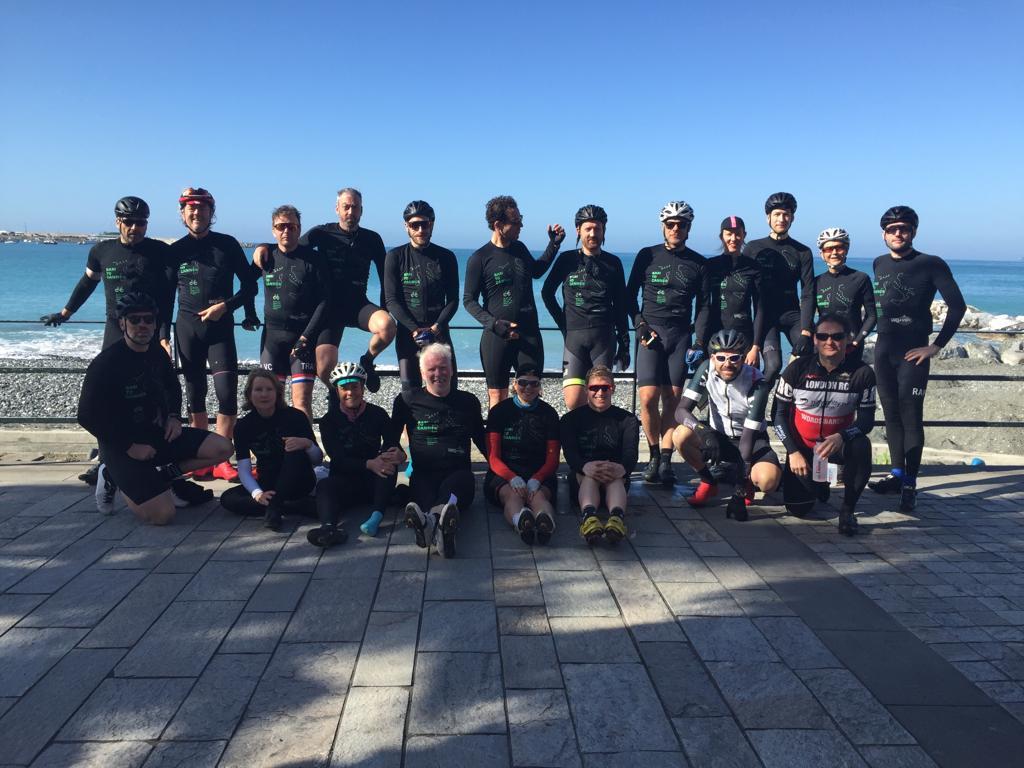