Portsmouth route: Beaune to Valence
It was a 6am start this morning, as Portsmouth riders rolled out of Beaune, led by Webb Yates for the 43km stage. The sun rose but clouds remained heavy as they made they way towards Mervans, the first stop of the day. Here the Folkestone riders join the same route as Portsmouth, although each remain about 30 mins apart in order not to clash. The group is running perfectly to time as it steadily rolls down endless, twisting roads lined with silver birch trees through to lunch at Chalamont.

For lunch, the catering team have created another vegan delight (sponsored by Morris+Company’s Veg+Van), accompanied by crusty baguettes and traditional french almond pastries, all of which serve to propel the riders into the second half of the day and another 150kms.

The afternoon was the toughest yet, with five climbs and a total ascent of 1,291m. Hills were scattered with pink cherry blossom as the riders descended into their final stop for well-earned pizza, sponsored by AHMM Refuel.

As dusk settled at around 6:30pm, the Portsmouth riders breezed through the final stage, the peloton keeping close and looking happy. As Ride Captain David Johnston of Wedlake Bell commented, “It’s brilliant to see the bonds being made and feel such energy from a group of genuinely lovely people.” Tomorrow is the penultimate day and the riders will be climbing high with a total ascent of 2,467m!

Folkestone route: Dijon to Valence
Today was the longest day for Folkestone route at 314km but both groups are now more than halfway through. Like the Portsmouth riders, the Folkestone route rolled out at 6am into another dark, damp morning led by Webb Yates. The morning came as a slow reveal of grey clouds and big, flat landscapes for a 62km stage with barely any ascent. The group is working well but the ever-present wind remains a troublesome companion, so riders take it in turns to shield others.

Make Architects lead out the next stage and despite the constant crosswinds the group makes up time as it cycles through Bresse – a region known for its chickens – accompanied by poultry-related jokes. Stage 3 is led out by Vectos, and goes from flat farmlands to more industrially-flavoured towns, interspersed with long straight roads lined by plane trees.

After lunch, the riders roll out into the first sunshine of the day that gets everyone shedding layers as soon as they are able. After a brief stop at Chalamont, the majority of the peloton tackle the lumpiest stage of the ride so far, led by the women all the way, and enjoy the pizza that awaits them at Hauterives. From there it’s the final stage of the day: a climb out of Hauterives, and then a long, fast and exhilarating descent into the dark and through to Valence. It’s been a very long and demanding day for the peloton but spirits are high and everyone is happy with their progress.

Italian route: Pienza to La Spezia
With the Italian route’s longest day ahead (at 274km), the group embarks on an outing that came very close but thankfully still avoided the 6am start, and heads off into a cool Tuscan sunrise at 30 after the dreaded hour! The day’s weather looked promising but failed to deliver, and we remained cool-ish (relatively-speaking – these would probably be tropical temperatures for the French pelotons!) for four of the five stages, and then finally a bit damp for the evening stage into the hotel in La Spezia, the first rain they’ve had, and hopefully the last.

Back to the morning: another old town square and another very accommodating cafe owner saw the group take coffee and some locally-produced patisseries in Castelnuovo Baradega – which later the same day will host the amateur Strada Bianchi race – before heading through to San Gimignano for ribolita and pasta. The morning was cool, overcast, and accentuated with vast numbers of cypress trees lining ridges and grand entrances to Tuscan villas. It’s amazing that the ride stayed rubber-side down with so many distracting vistas.

Post-lunch, the riders climbed (have we mentioned there is a bit of climbing on this route?), and climbed a little more, but those hills finally succumbed to the collective will of the peloton, and down they went! Down and down and down with sweeping corners, and slightly improved road surfaces, to Bientina for the penultimate stop of the day: a busy little town with a cafe full of gamblers.

Unlike the previous days, the riders have had to stretch themselves on the longer Day 4 with an additional stage, so from Bientina to Lido di Camaiore, the 16 riders on the stage worked cohesively to cover 50km in a cracking time, before a Lewis Hamilton-styled timed pitstop got them back on the road for the final stage. It was a flat run along the Tirreno Adriatico TTT stage roads, which were already showing signs of race prep, with team buses in place, and hoardings going up – most of which the peloton may have been oblivious to – took the ride into the naval port of La Spezia. Thankfully a quiet and damp Sunday, along with some incredible pro team-style riding, meant for a very smooth run to the hotel.

A local pizzeria showered the riders in food, until we had to say enough was enough. The generosity of the staff and the owner was amazing, but after 274 km in the saddle, everyone was suitable exhausted, replenished, and therefore ready to retreat in preparation for another day of changing scenery, challenging city navigation, and the penultimate night in seaside Finale Ligure.

It’s incredible to think that tomorrow the group will arrive at the Italian Riviera, having started in the heel of Italy, with only one day then remaining on this, the first of hopefully many MIPIMs through Italy. 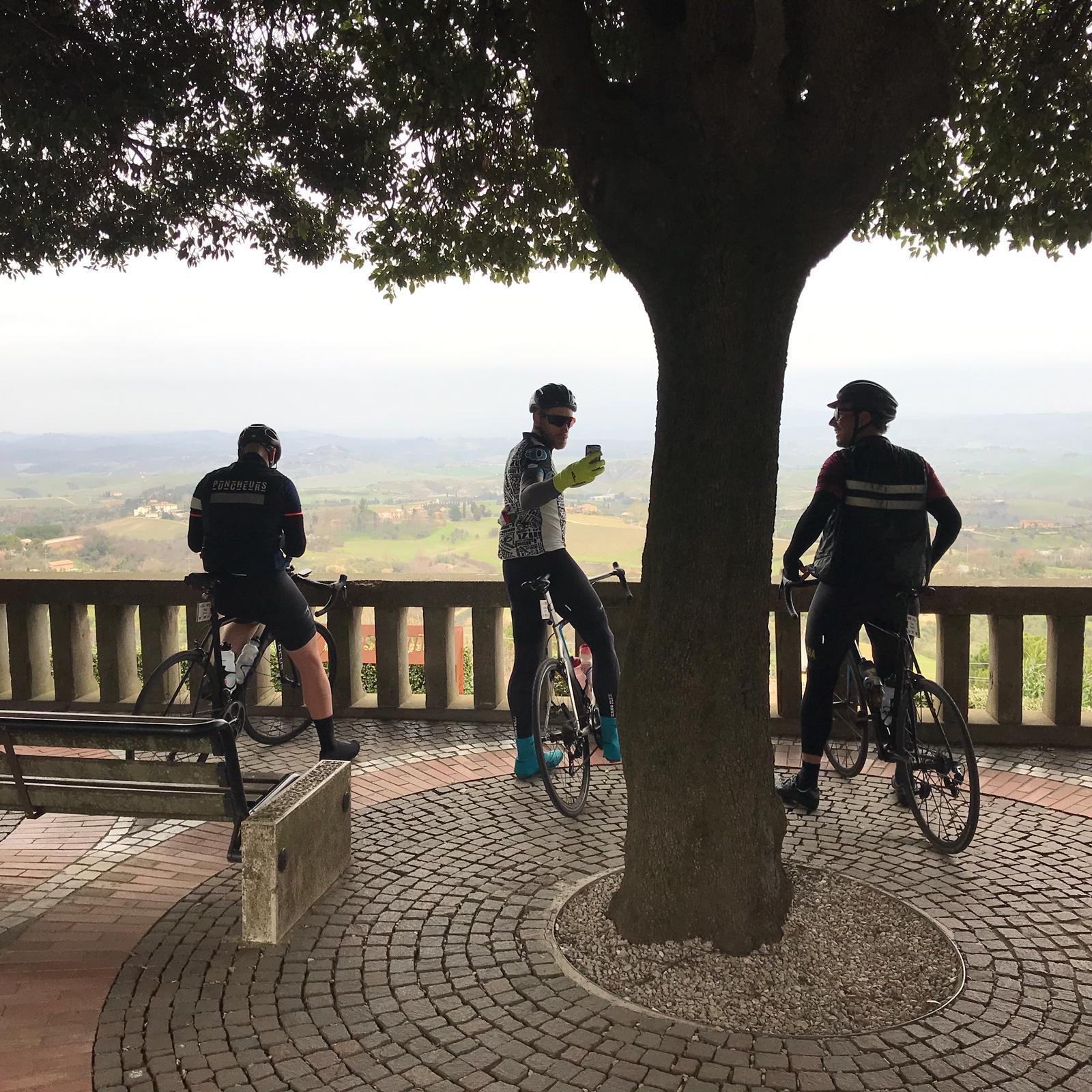 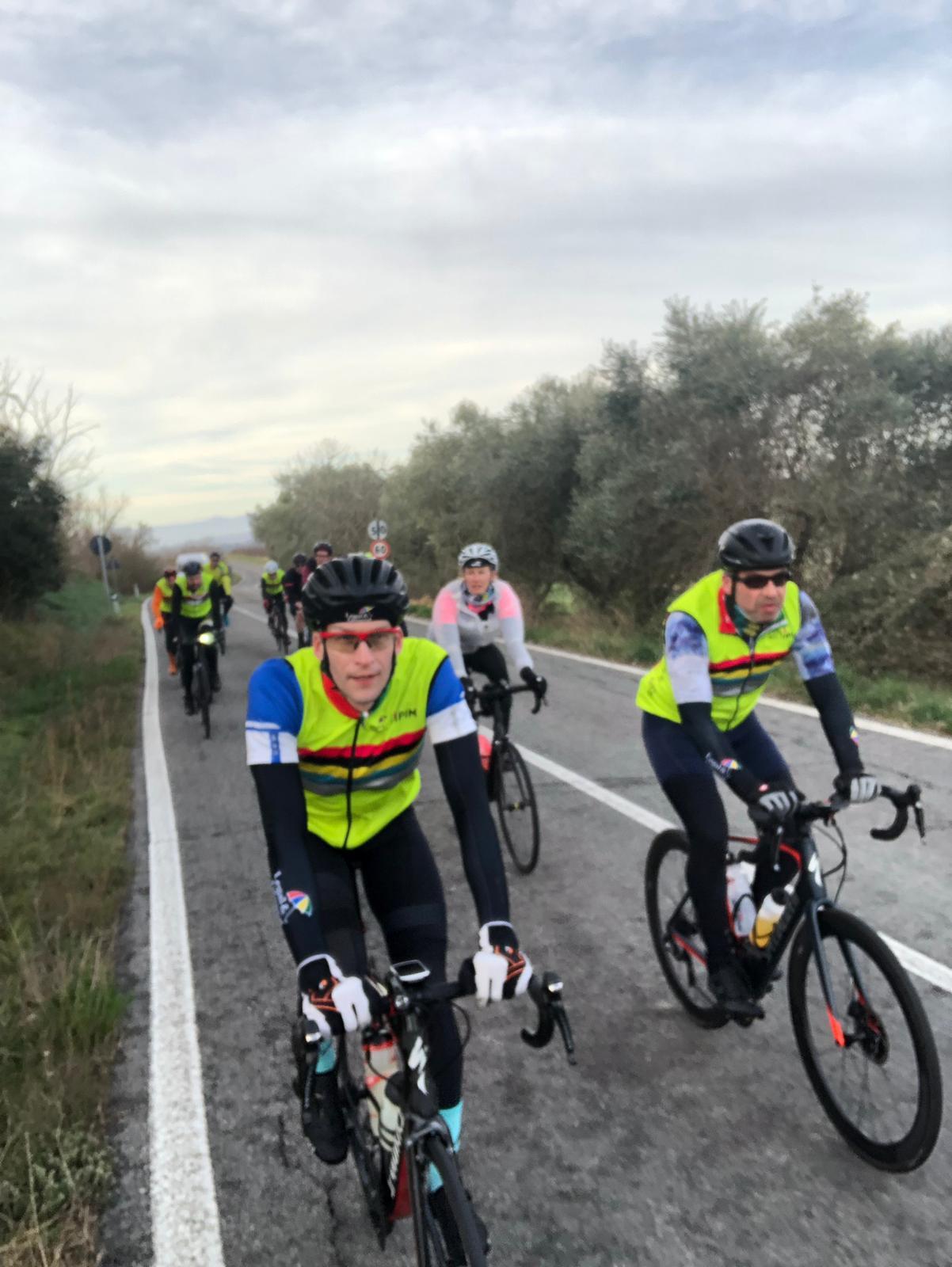